Tiny triangular sandwiches with no crusts, mini sausage rolls, weak squash of indeterminate fruit origin, jelly and squirty cream. All tasty and some would say essential ingredients of any party (adults can swap the weak squash for an alcohol punch of equal indeterminate origin.)

All fine and upstanding but all must bow beneath the king of party food. Sometimes presented in hedgehog form, sometimes plainly on a stick, always delicious… 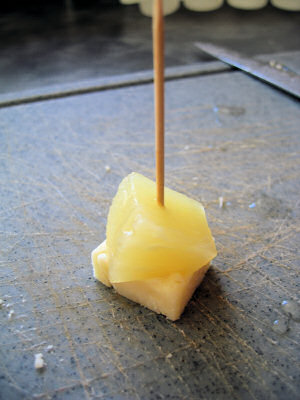 THE CHEESE AND PINEAPPLE ON A STICK!

How does one improve on perfection? Where to start? How would I turn gold into platinum and not lead?

How about sticking it into a smoothie maker and making a drink?

Firstly I gathered the ingredients 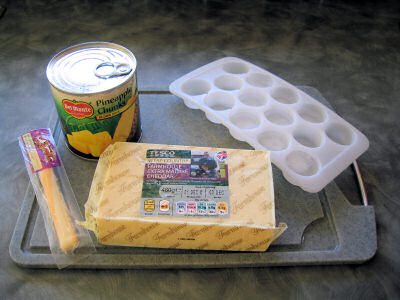 Pineapple chunks (I used a tin because I’m lazy and I needed the juice)
Cheese (I used mature cheddar. It has to be cheddar with pineapple and mature is that bit crumblier)
Ice (Nobody wants warm cheese and pineapple now do they)
A cheese string for garnish (optional)

Time to get preparing

As I had a tin of pineapple I didn’t have to do anything with that. If you were using a whole pineapple you’d have to core it, slice off the outside bit, stab yourself in the hand, swear, try and catch all the juice and still end up with brown bits in it.

The cheese needed grating. The smoothie maker was used to nice soft bits of fruit. I wasn’t going to risk the wife coming home to find the smoothie maker in the bin with a lump of cheese wedged under the blades. Your wife may be more understanding, you may get away with rolled eyes and a tut, I wasn’t taking that chance. Besides I’m the risk taking pioneer here, you can just turn round and say you were copying a recipe off the internet, I couldn’t as I was writing the recipe.

Now’s a good time to prepare the cheese string. Just peel back the stringy bits until they’re about half way down. Do this all the way round to create a fan. If in doubt ask a child how a cheese string works as they know all about such things.

Add the ice, pineapple chunks, cheese and a fair bit of the pineapple juice into the smoothie maker. 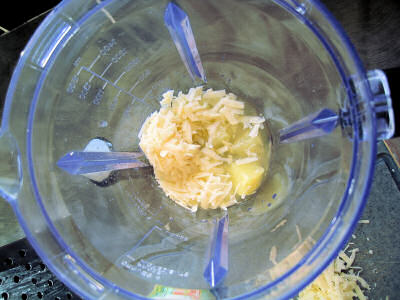 Now blitz it as you would any smoothie. I did it for about 30 seconds in the vague hope of getting rid of the lumpy bits. I also hoped the ice would grind the cheese into submission. 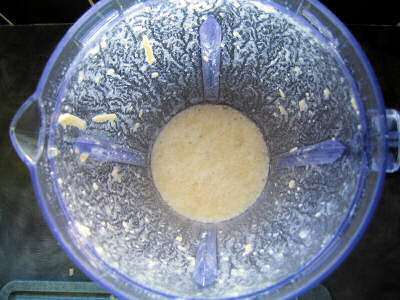 I was wrong. The resulting mixture looked like monkey sick. Doubts were forming in my mind. However while the devils of monkey sick doubt were banging at my eyeballs the angels of cheese and pineapple goodness were filling my nostrils with party joy.

Good triumphed over evil and the drink was nearly complete.

The moment of truth

I poured the mixture into a glass and added the cheese string. It looked pretty damn cosmopolitan from where I was standing. 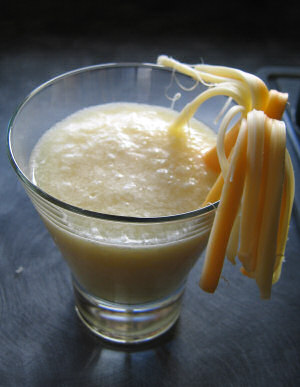 Now the moment of truth… 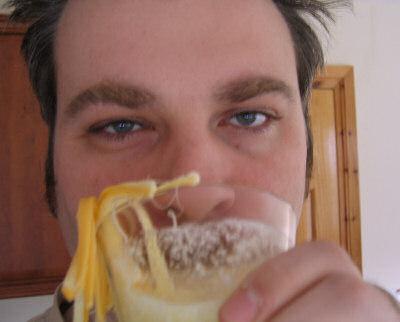 How did it taste? Like a supermodel with varicose veins, gorgeous but with bothersome lumps.

The taste was pure cheese and pineappley goodness but the cheese did have a habit of sticking to the teeth and throat.

To quote some old cheese recipe book. Have cheese, have friends, have fun!

3 replies on “Nectar of the Gods!”

I’ve tried that pineapple cream cheese. I’m afraid it’s nothing but a synthetic charlatan, I wolf in cheese clothing if you will.

They say the eyes are the windows of the soul. Those very eyes are mine and those eyes had stayed up to 4 o’clock in the morning drinking vodka and playing online poker. Hence the glassy dead eyes of a freshly gutted fish instead of the usual bright sparkling pools of joy. Look at them, they’re so tired they can’t even be bothered to have symmetrical bags underneath them.

Have you seen what happens to cheese sauce when it cools down? It’s just replacing the monkey sick texture with baby sick.

I appreciate the input of a food technologist though, even though I don’t have the faintest idea what one is. Do you measure the internal angles of dairylea triangles?